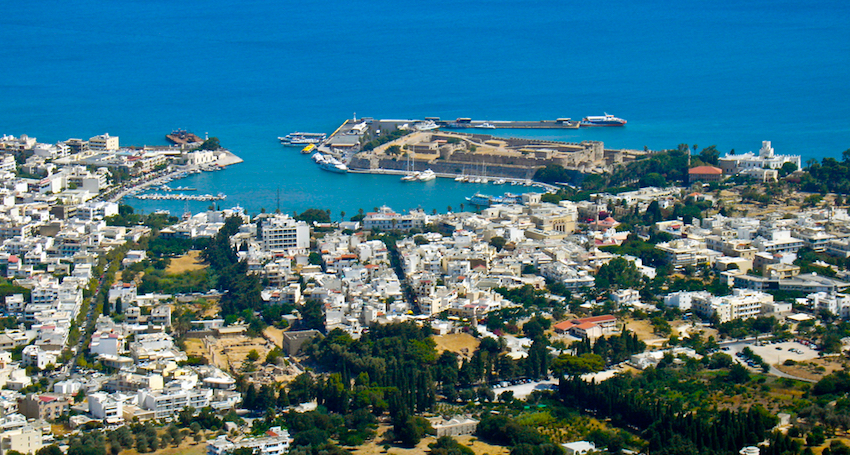 Kos is located in the south-eastern Aegean Sea south of Kalymnos and north of Nisyros at the ancient Keramiko gulf (Kerme Körfezi) or Kos gulf, just 3 nautical miles from Asia Minor coast. It is the third largest island in the Dodecanese, its extent 290,29 kilometers and its circumnavigation is around 60 nautical miles. From the prehistoric times it was an important channel of the sea ways that started from the Black Sea and along the shoreline of Asia Minor and the islands of Aegean and reached North Africa.

Kos is the birthplace of the father of medicine, Hippocrates, which was born on the island around 460 B.C. and founded the Great School of Medicine of Kos. The island is famous for its rich vegetation and its temperate climate and it was characterized by the Roman doctor Gallino as “the most temperate place in the world”. Kos Island Air ViewThe morphology of the ground varies and is the result of long-lasting geological changes particularly owed to the volcanic activity of the commonly known Aegean Arc (Nisyros, Thira, Milos, Methana).

According to the latest geological studies seven volcanoes are located between Nisyros and Kos and one of them in the Isthmus of Kefalos is inactive today. The big explosion happened 160,000 years ago between Nisyros and Kefalos. As a result it covered half of the island of Kos, in the western part, with a layer of ash and kisiris thickness of about 30 meters. Kos’s ground fertility is a result of its volcanic origin, which had been known since antiquity and has left the proverbial phrase “whom Kos can’t nourish Egypt can’t either”.

The Marina of Kos Island officially opened on the 15th of May 2001. Kos Island Ancient AgoraSince then high quality services are offered to guests. Located next to Kos Island’s old harbour it’s the heart of the Dodecanese islands and serves as the best sailing & cruising area in Europe! It offers a wide range of benefits such as: Pilot speedboat, WC-showers, Trolleys, Parking Lot, Bilge pump out, Sewerage pump out, Waste oil disposal, Refuse containers, Fuel station. Reception, Authorities, Info centre, Meeting room & Guests’ Suites. Weather report, Internet, telephone and facsimile services are offered in the Marina’s Info Centre and many more.
Kos Island’s Marina can become your own personal haven. We’ll ensure that your stay at Kos Marina is worth every moment of your time.


The best kept secret in the Aegean sea…
a place where antiquity and modern civilisation find themselves in unison. Monuments of the past await your discovery and admiration.
Kos of the present awaits to live with you the carefree life of summer in Greece, to enjoy with you the sun, the sea, the mood.

We use cookies to offer you the best possible experience on our page. If you continue to use the page, we will assume that you are satisfied with it.OkCookies policy